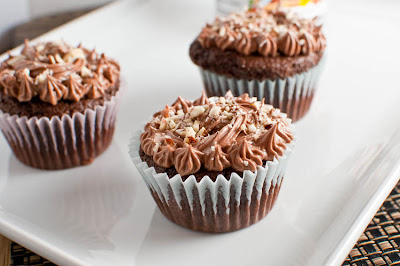 TGIF!  I've got the weekend off of work and I'm ready for it!  I'm not so ready to wake up super early tomorrow morning and fun 3.1 miles at 8am.  In the cold.  But, it's my own doing.  I freely signed up for the race knowing what I was getting myself into.  And so if I'm to be punished, so be it. 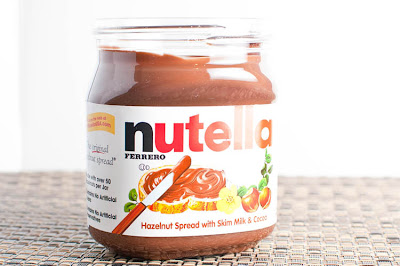 Bold statements are usually made in our house.  Usually those involving death threats (in a loving manner, of course.  like I tell everyone who looks seemingly shocked after I threaten to kill Andy - this is how we talk, hehe) or, heaven forbid, threats to take away chocolate cupcakes to one's co-workers instead of leaving them at home.  Yes.  Andy looked at me with disgust as I loaded these up last week to take to work.  Hey.  I left him 3.  And he had already eaten 3 the night before too.  So seriously.  He had his fill, it was time to give them to a more deserving crowd. 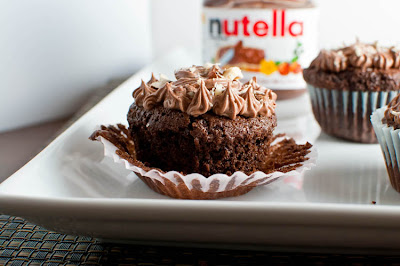 I know it took me a while to post these, but hey, I wanted to save the best for the end of the week.  And there's a new poll at the end of this post, so don't forget to vote for my next little treat (I promise it won't take me as long to post this time!). 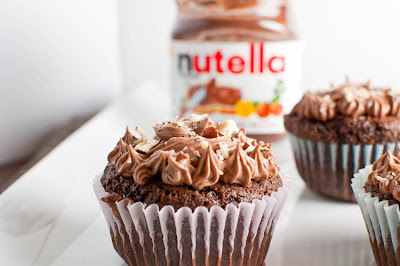 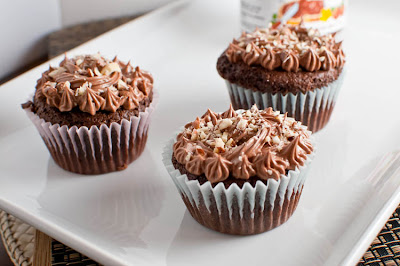 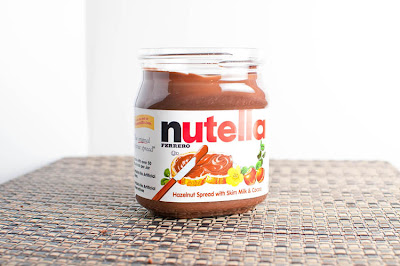 1 & 1/2 sticks unsalted butter, softened
1 13-ounce jar of Nutella
pinch of salt
1 tablespoon white/clear vanilla extract
2-3 cups powdered sugar (original recipe called for a full lb., and by all means, go ahead with that if you'd like, but I just couldn't see using that much sugar)
6-8 tablespoons heavy cream
For the cupcakes:
Preheat the oven to 350 degrees.
Line muffin pans with paper liners.
In a large bowl, combine the flour, cocoa powder, espresso powder, sugar, baking powder, baking soda, and salt.  Mix well and set aside.
In a separate, medium-sized bowl, combine the milk, vegetable oil, vanilla, and apple cider vinegar, and mix well.
Slowly add wet mixture to dry ingredients and stir until just incorporated.
Fill muffin liners about halfway to 3/4 full.
Bake for 15 to 20 minutes, or until a toothpick inserted into the center comes out clean.
Remove cupcakes from oven and let cool in tin for about 10 minutes.  Remove cupcakes from tin and transfer to a wire rack to let cool to room temperature before frosting.
For the frosting:

This makes a TON of frosting, so you could definitely save some for later or half the recipe if you're not doing too many cupcakes. (I made about 18 cupcakes, and still had a bunch leftover)
In a large bowl, beat butter and Nutella until well combined.
Slowly add in powdered sugar and continue beating until incorporated.
Add salt, vanilla, and 3 tablespoons of heavy cream. Beat on low speed until moistened.  Add heavy cream, one tablespoon at a time, until you reach your preferred consistency.
Beat frosting on high until light and fluffy, about 3-5 minutes.

Fill a piping bag with a little bit of frosting and pierce the cooled cupcakes in the center to fill and then decoratively frost the tops.  Sprinkle with chopped hazelnuts, if desired.
Remember those bold statements I was talking about earlier?  Well, Andy mocked me when I told him I was buying Nutella.  He's somewhat sheltered in the Nutella area, and jokingly made faces at me as I put it in our cart at the grocery.
So to his surprise, he actually loved these cupcakes.  So much so, that he made the boldest statement ever, saying that these were the best cupcakes I'd ever made.  Ever.  So seriously, if Andy can make such a statement, I think these are definitely worth a go.  And as for my coworkers, they loved them too.  So they're definitely a crowd pleaser. =)
And to the poll!  I'm in a vague and random sort of mood, so I'll leave it somewhat open.  I'll definitely need something to replenish me after I'm done with my race tomorrow morning!  Enjoy your weekend guys!