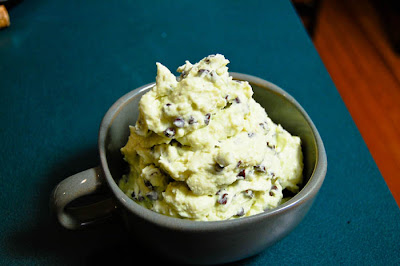 I first want to give Olga over at MangoTomato big props for posting a link to Veggie Belly's Photography post on her twitter page. I learned more from than 1 post than I did trying to skim my Nikon D40 reference book. So thank you! I know understand my manual settings a little bit more now thanks to you guys!

And also, I didn't win Battle Skewer over at Foodie Fights , but one of the judges, Greg from Sippity Sup (who happens to have a pretty informative and awesome blog himself!) commented in his write-up that he really liked my blog. Cool huh? Yeah, it's the little things that make me happy!

So anyway... while I was making this frozen yogurt, Andy and I had a conversation that went a little something like this:


Andy: What are you making?

Andy: is that yogurt going in there?

Andy: then you're making frozen yogurt. that's not ice cream.

Me: oh who cares, it all tastes the same.

Andy: Umm no... no it doesn't. Frozen yogurt is not ice cream.

All my life I've never thought frozen yogurt tasted any different from ice cream. Am I alone in this? Either way, after making homemade frozen yogurt... I could definitely taste the difference.

In a large bowl, sprinkle the gelatin over 1/2 cup of the milk.

In a small saucepan, cimbine the remaining 1/2 cup milk with the sugar and bring to a boil over high heat. Stir until dissolved and then pour the hot mixture in the bowl with the gelatin and milk. Whisk until the gelatin is completely dissolved (this part is crucial because you don't want little chunks of undissolved gelatin to be mixed throughout the final product. Not tasty, trust me).

Whisk the yogurt into the gelatin mixture. Whisk in peppermint extract and a few drops of the neon green food coloring until you've reached your desired color.

Using an ice cream maker, freeze the mixture according to the machine's directions. I had the mixture in mine for about 25-30 minutes for a nice creamy, solid texture. About 5 minutes before you're ready to stop the machine, add in the chocolate chips. Serve immediately.

After tasting homemade frozen yogurt, I can definitely tell a difference between it and ice cream. So yeah, as much as I hate to admit it... Andy was right about something. =) Enjoy!

P.S. Check out our CSA bundle this week - we got a boat load of stuff!! 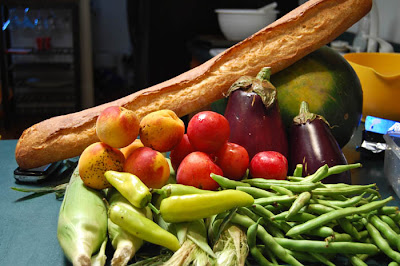 I took some of your ideas from last week and will definitely have some posts coming up. So feel free to suggest some stuff for this weeks goodies... I've got a lot of fresh fruit, so they're just great for whatever ideas you guys have in store!
Posted by Peggy G. at 2:41 PM