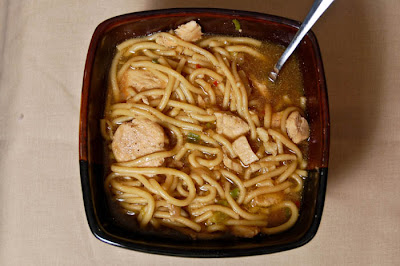 It's been quite cold here in Louisville lately, and today is not exception. There's a few inches of snow on the ground and I'm sure the city is in mass hysteria... especially the thousands that can not drive in the snow. I don't know what it is, but this city is NEVER prepared for snow. The snow trucks never come prepared, or salt the night before a known snow is coming. People drive just like they normally would on a sunny day, which is not the right way to drive in the snow. That's how you end up in a ditch or a median. But best of all... on the seemingly coldest and most snow filled day of the year so far... I am intending to test drive and purchase a new car. Am I crazy? Yes. But more importantly, I'm in need of a new vehicle... and why not today. When the salesman don't want to spend hours outside and more time inside signing paperwork and getting the deal done. That's my viewpoint anyway, I'll keep you updated on whether this plan actually worked or not.


Ingredients:
Adapted from The Way The Cookie Crumbles' blog

This is definitely a crockpot soup. Or I made it that way anyway. Turn your crockpot onto the high setting to get it warmed up.

In a large skillet, heat up oil under medium high heat and cook the chicken medallions until no longer pink. Transfer chicken to crockpot and cover.

In same skillet used for chicken, saute the onions, garlic, and ginger for about 5 minutes, when onions are soft and translucent. Add mixture to crockpot over chicken.

Deglaze skillet of brown bits by adding 1 cup of water to pan and scraping of the sucs. Then dump that water into the crockpot. Add remaining 3 cups of water and 4 cups of chicken broth into crockpot as well. Let simmer in crockpot until almost ready to serve, stirring occasionally. Mine was in there for about 45 minutes.

About 15 minutes before you're ready to dig in, add in noodles and mushrooms. When noodles are soft, stir in rice vinegar, soy sauce, chili flakes, sesame oil, and scallions.

Ladle into bowls and serve hot! 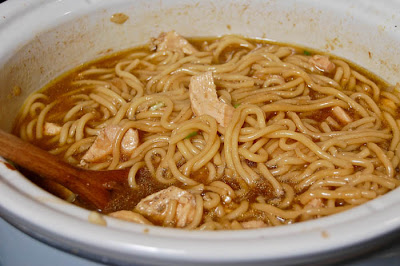 The only problem I had with this dish was that I used too many noodles. But besides that, the flavors were all there and it definitely warms you up on a cold and frigid day. Just a different take on a classic. Enjoy!
Posted by Peggy G. at 5:04 AM