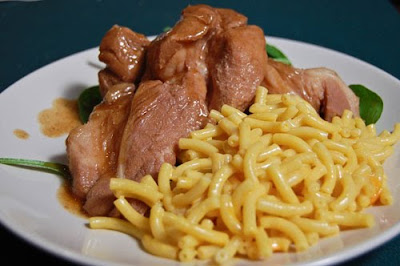 I have a confession. I was oh so excited about these ribs. It was a night where I had to work and I was just gonna let these babies braise in the slow-cooker all day and just be tender and fall off the bone meat. So didn't happen. I made the mistake of setting the temperature too low and it was like they sat in luke warm water all day. The flavor was there, the meat was cooked, it just wasn't what I had envisioned... but so it goes... as adapted from Foodies' Kitchen

Alright, I've got to start out by saying that the ribs were probably the meatiest ribs I've ever bought. I've never seen ribs with so much meat to bone ratio. With that said, let's get on with it...

Combine all ingredients, except ribs and water in slow cooker. Stir to dissolve sugar.

Add the ribs and add water until ribs are about 2/3 covered.

Crank slow cooker to high until mixture comes to a boil. Then simmer down at low for 8-9 hours. Don't make it too low like I did, or you'll just have lukewarm liquid around the ribs and they won't get tenderized properly.

And that's pretty much it. I did make a quick sauce out of the braising liquid though.

Take 1 cup of liquid and heat in small saucepan under high heat. Mix 1 tablespoon of corn starch with 1 tablespoon cold water. Add to saucepan and stir until thickened. Take off heat and season with salt and pepper to taste. Drizzle over the ribs.

Andy said the best part of the meal was the mac n cheese. It was the Annie's Mac N Cheese, which I personally think is the best boxed kind you can get. He said the ribs were good, he didn't care for the cinnamon spice in there, but he said they weren't bad. That's a nice way of him telling me I shouldn't make that again for a long time. But anyway... you win some and you lose some. And if you guys haven't signed up yet, sign up for the next Foodie Fights, where i'll be the judge since I won this last competition with cumin/pecan. Thanks to all that voted! Enjoy!
Posted by Peggy G. at 6:56 AM