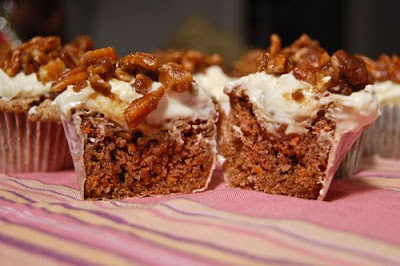 This weekend has definitely been a weekend of food. Had a blast doing an all day cook-off for a friend's birthday. We had the lunch meal and needless to say, it was amazing. The secret ingredient was pistachios and the highlight of our meal probably was our Mango-Pistachio Milkshake... that we turned into a beer float. Yes... beer float. BBC Bourbon Barrel Stout beer float I might add. Yum!

But we're not here to talk about that, we're here to talk about Cumin and Pecans. At first I was a little hesitant on what to do. I thought maybe a cumin pecan breading on some sort of protein would work out, but then I thought about it, and the past couple of challenges I used a protein and it seemed like the protein had the highlight, and not the main ingredients. So I did a little bit of research on the cumin because I thought that was the hardest ingredient to really incorporate. After looking a little bit, I saw that cumin actually brings out the sweetness in things, despite it's somewhat smoky flavor. So I wanted to play on that and do a sort of savory dessert. Then I thought of carrot cake. And carrot cake turned into cupcake. And voila, my final product... Cumin Carrot Cake Cupcakes with Cumin Maple Cream Cheese Frosting & Candied Pecans. That's a mouthful, eh? In more ways than one, of course...

In a medium bowl, mix up first 6 ingredients.

In a separate large bowl, mix together the sugar and the canola oil. Whisk in your eggs, one at a time.

Add in the flour mixture until well blended. Then add in your carrots.

Divide batter among the cupcake molds, filling each about 1/2 way. Bake for about 20 minutes, when you can stick a toothpick in them and it comes out clean. Let cool on a baking rack before icing.

While you're waiting for the cupcakes to cool, you can whip up this amazing frosting...

In a small bowl, beat all ingredients with a hand blender until mixture is smooth and fluffy. Chill for about 10 minutes so it is easier to ice cupcakes. 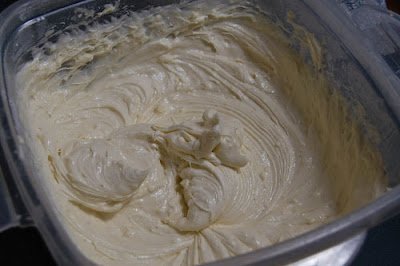 Now you can candy your pecans...

Melt the butter in a medium saucepan. Add the brown sugar and mix well until smooth. Make sure the sugar "soaks" up the butter, it should be a sort of "creamy" consistency. Add the cream and it should lighten up the color a little bit. Then toss in your pecans and coat evenly. Take off heat and let cool. 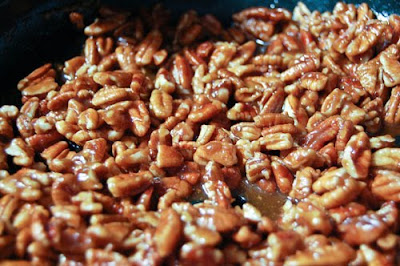 Now to put your cupcakes together...

I found that the cupcakes were really airy and almost sunk in a little bit at the top, so to fill that void, I placed some pecans on the center of each cupcake like so... 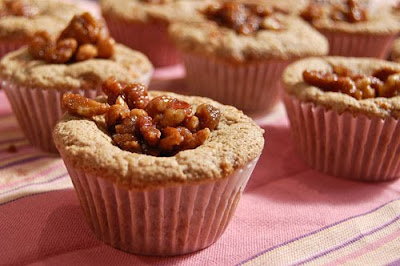 Then top each cupcake with some frosting... 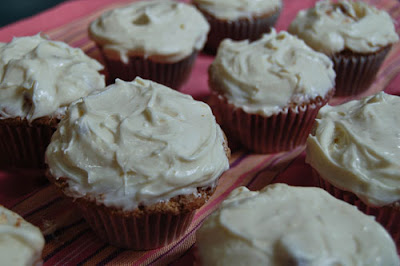 The top with even more pecans... 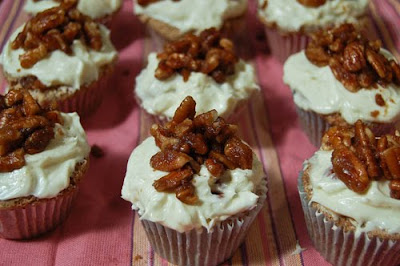 And then you can split in half to share or just gobble them all up yourself...

I thought this was really fun. I don't do many dessert posts and I was definitely scared to try this, but it turned out really well. I know this because Andy has been religiously eating them for breakfast in the morning ever since I made them the other night. And don't forget to vote for the best recipe (hopefully you think it's mine, but my competition is stiff!) at FoodieFights on Tuesday and Wednesday!
Posted by Peggy G. at 6:21 AM