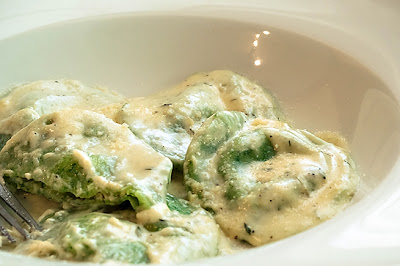 So I've been a little sparse in the posting lately.  Life has caught up with me and I just haven't had the time to sit down and blog.

House hunting has become somewhat of a bust - between finding the right home and dealing with the bank... it just doesn't look like it'll be a possibility until the end of the year.  It bums out Andy more than it does me, but it's still a kick in the butt when we had our hopes so high up.

I hesitated to start the garden up this year because we thought we'd have bought a home by now, but it looks like I'll have time to plant one here after all.  I'm doing something different this year, too.  I'm trying the whole "urban gardening" method - growing everything in big planters on our back deck.  I've got one big pot for potatoes, and several medium-sized for bell peppers, tomatoes, and an array of herbs.  I'll keep you guys updated on how that all goes!

I had a bunch of spare time yesterday so I decided to take the time to roll out some fresh pasta.  Ravioli is one of the easiest things and the possibilities for stuffing are endless.  I had a ton left over and ended up freezing them - definitely will make for quick and easy meals later on!

3 eggs
2 teaspoons olive oil
1 teaspoon salt
8 oz. bread flour, plus more, if needed (you can use a combination or substitution of semolina, but I find it makes the dough harder to work with afterwards, and most people are more apt to have bread flour in their pantry than semolina)
4 oz. blanched spinach, pureed

In the bowl of a mixer with the paddle attachment, combine the eggs, olive oil, salt, and pureed spinach.  Add about a third of the flour and mix until combined.  Switch to the dough hook attachment and continue adding flour until the dough is dry and cannot absorb any more flour (you may need more than the recipe says - I did).

Remove the dough from the bowl and wrap in plastic wrap.  Let sit at room temperature for about 30 minutes.

Meanwhile, you can make your filling.  In a food processor, combine the crab meat, parsley, ricotta, and egg.  Mix until combined and season with salt and pepper, to taste.  Keep in the refrigerator until needed.

After the dough has rested, unwrap and cut into fourths.  Using one section at a time (make sure to cover the other sections so they don't dry out), roll out with a pasta machine or rolling pin (I keep it old school and do this).  You'll want the dough to be as thin as possible, but still pliable enough to work with.  Make sure to have some extra flour handy for dusting so the pasta doesn't stick to your machine or cutting board.

Using a round biscuit cutter (I used a 2" diameter round) or ravioli press, cut out an even amount of ravioli shapes.

Pair up the rounds, one round will have filling (the bottom), one will be the topper.  Place about a tablespoon or so of filling on each bottom round (this will vary depending on the size of your ravioli) - you'll want a decent amount of space around the filling.

Using a pastry brush, brush some warm water around the edges of the bottom round.  Place the top round on top of the filling, and sealing the edges.  Make sure to press around the filling so there are no air pockets.

Continue until all of the dough is used up.

Place ravioli on a baking sheet dusted with flour and place in the refrigerator for at least 15 minutes.
You can also freeze the raviolis at this point for use later.

When you're ready to cook these guys, bring a large pot of salted water to a boil.  Add the raviolis and cook for about 3-5 minutes, or until the pasta is just cooked.  Fresh pasta most always takes less time to cook than dried.  Drain and add into the sauce, or reserve and pour sauce over top.

To make the sauce, just add the olive oil to a medium saute pan under medium high heat.  Add the garlic and thyme and cook until fragrant, about a minute or so.  Add the cream to the pan and reduce until thickened.  Stir in the parmesan cheese until melted.  Season with salt and pepper, to taste.  You can add the raviolis to the sauce at this point or pour the sauce over top of the raviolis - whichever you prefer!

And voila - homemade pasta at it's finest.  Definitely easy and worth the little bit of extra effort! 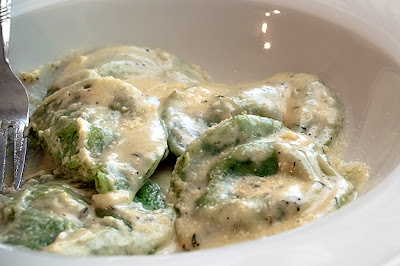 Hope you guys have a great rest of the week!