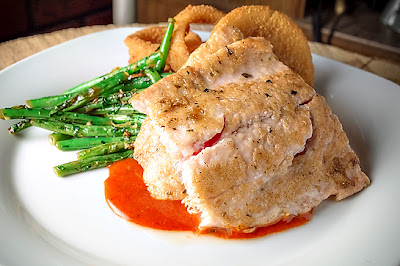 Louisville, KY has been in the spotlight lately.  Especially after Monday night's win at the NCAA championship - which for a non-basketball watcher, was actually quite exciting.  I heard fireworks and people screaming for well into the night, long after the game actually ended.  And I didn't mind.  It was pretty cool to hear the city come alive and come together.

And here in about a month or so, tons of people from all over the country will flood into the city to witness the most exciting 2 minutes in sports - the Kentucky Derby.  It's always a time of drinking bourbon, eating food, spending money, and watching the races!  I'm definitely proud to call Louisville my home.

Another exciting thing, which may not be as exciting to those of you who are not from Louisville or Kentucky - but the chef that owns the restaurant that I currently work at, Edward Lee - is coming out with a cookbook.  And it looks awesome.  Smoke & Pickles will definitely be on my bookshelf come May 1st - and I hope it'll be on yours too!

Anyway, Andy loved this meal.  I don't know if he was starving by the time I made it, or if he really just overly enjoyed it, but he cleared his plate AND the rest of mine too.  Another winner in the books!

Heat a large skillet under medium high heat.  Melt the 3 tablespoons of butter and add garlic.  Saute until fragrant.  Toss in the hericot verts and coat in the butter.  Add the lemon juice and cook until reduced.  Season with salt and pepper, to taste.  Toss the hericot verts with the parsley until combined.

In a small bowl, combine the ranch, Gochujang, maple syrup, and sesame oil.  If the mixture is too thick, add a little bit of warm water until you reach your desired consistency.

Season the salmon fillets with salt and pepper and dredge in the flour, dusting off any excess.  Add the salmon to the saute pan and cook until browned.  Flip over and cook until desired temperature.  I like to cook my salmon to medium, with a little bit of pink still in the middle.

To plate, place a good amount of sauce on the center of the plate.  Place green beans on sauce and top with salmon fillets.  We had some onion rings in the freezer and decided to fry those up and serve them with this as an added crunch factor.  It was pretty darn delicious, if you ask me! 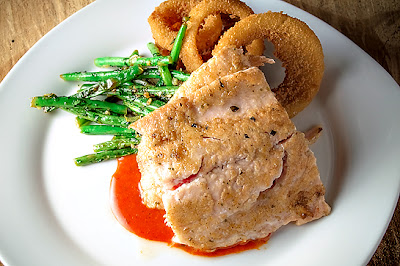