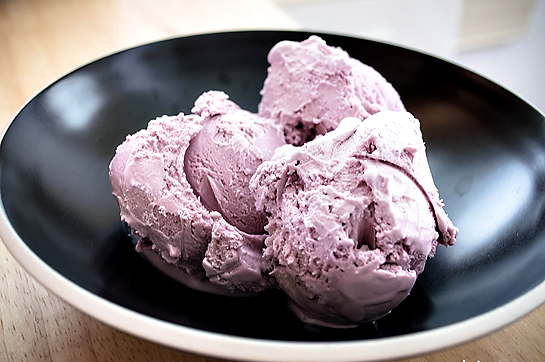 My husband can eat ice cream any time of the year.  Any time of the day.  It can be -3F in the frozen tundra and he would be in the mood for ice cream.

So when it came time to pick something for this month's Secret Recipe Club, I knew I could treat the man with some ice cream.  My secret food blogger was Nichole from Cookaholic Wife.  She's got an awesome blog full of all sorts of recipes.  We're also about the same age as me and discovered her cooking talents later on in life in her early 20's (same as myself, as well!).  I could definitely relate to this girl!

I came across her recipe for Coconut Ice Cream and knew I had to try it!  I've been wanting to experiment with coconut milk as part of a base for ice cream for quite some time.  The only thing I added to the recipe was a little blackberry reduction to make it a little fruity and festive.  The result was a creamy, delicious, coconut laden ice cream that was gone in a matter of hours!  It seriously took longer to make and freeze than it did to completely devour.

In a small saucepan, heat your blackberries and sugar under medium heat.  Cook until the blackberries soften and start to break down.  Reduce by half.  Strain mixture through a chinois or fine-mesh strainer.  You should end up with about 1/4-1/2 cup.  Let mixture cool to room temperature.

Shake the coconut milk before you open it to emulsify it.  If you don't shake it, you'll end up with coconut water on the bottom and coconut cream on the top.  In a medium bowl, combine the coconut milk, milk, coconut flakes, and blackberry reduction.  Mix until smooth and a pale purplish color.  Refrigerate for 4 hours.

Process in ice cream maker according to manufacturer's directions.  Freeze mixture for about 3-4 hours before serving.

The result ended up being one of the creamiest ice creams we've ever made.  My husband, who claims to not like any fruit-laden desserts, ate every last drop.  So it gets the Garbe approval!

Want to join SRC?  Find out how, here!