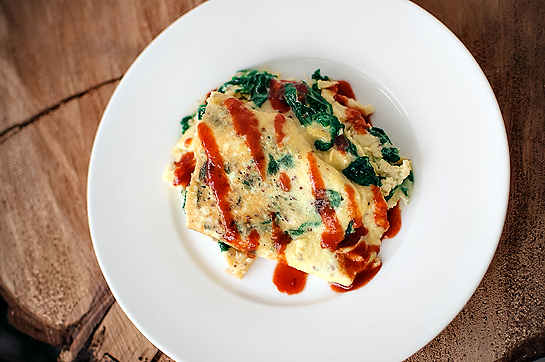 With the close of another quarter of school, I'm one step closer to finishing!  I get to do my internship during my last lab (which happens to be next quarter) and I couldn't be more excited!  But I'm also excited about the much needed break until the new year.

It's been hard to have differing schedules with Andy.  He's a nine-to-fiver and I'm a 3-midnight kind of gal.  But we make it work.  We have lunch dates.  He takes days off (apparently he's got tons of vacation days that he needs to take).  We make time for each other and I'm thankful for that.

So when time is limited, meals end up being quick and easy.  So I've been on an egg kick.  Omelets used to be my go-to meal when I lived with my parents.  My favorite combination?  Hot dogs and cheddar.  I know - weird.  My omelet preferences have since become more "adult" in nature over the years, but I still revert to the classic every now and then.  Don't hate.

Heat a medium skillet under medium high heat.  Melt 1 tablespoon of the butter in the pan and add the spinach along with a big pinch of salt and pepper.  Stir the spinach constantly until it wilts (the stirring creates steam which causes it to spinach to wilt faster than if you were to just leave it alone).  Remove from heat and place in a medium bowl to cool.

Once the spinach is at room temperature, add eggs, milk, dijon mustard, and cheese to the bowl.  Whisk until well mixed.

In a medium nonstick skillet, melt the butter under medium heat.  Pour in egg mixture and cook until the bottom and edges are set, with the top and middle still liquid.  Now this is where people differ in their omelet-making.  Some people fold both sides inward.  Some people roll.  Some people just fold one side over.  You can do whatever you fancy!  I tend to gravitate toward just folding one side over.  It's easier than the other two, and if you mess us, it's easy to make it look like an omelet after some quick damage control.  But feel free to take on whatever omelet construction you deem fit.

So fold accordingly and cook just until egg on the inside is just cooked through.  It should still be light and delicate on the inside. 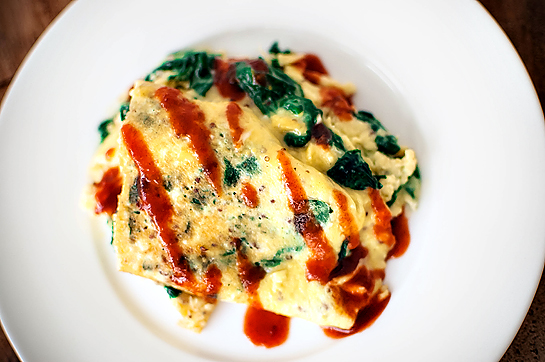 Serve with hot sauce and you're in business!

Hope you guys enjoy the last day of the weekend and have a great start to your week!