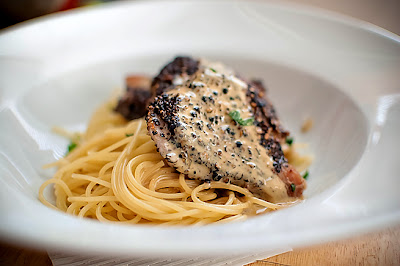 This one is fairly simple, and quick - think less than 30 minutes!  Which is always good for a weeknight, right?  The only thing I maybe would have done differently is to use different peppercorns.  I used black and they just seemed to overpower the pork a little.  Maybe next time I'll use a younger peppercorn (green) or a pink peppercorn (which really isn't a peppercorn, but a dried berry).  Either way, the sauce was delicious and the noodles gave the dish some depth!  Feel free to add in some fresh vegetables and toss together for an awesome pasta dish!

In a small bowl, combine the 2 teaspoons of salt and crushed peppercorns.  Lightly press both sides of each pork medallion into the mixture.

Heat olive oil in a large saute pan under medium high heat.  Add the pork medallions and cook until browned, about 2 minutes per side.

Remove the medallions from the pan and keep warm.  Deglaze the saute pan with the wine and vinegar.  Reduce until about 2 tablespoons remain.

Add the cream and reduce mixture to desired consistency, about 3-5 minutes.  Season with salt and pepper to taste.

Serve the pork over top the noodles and top with cream sauce.  Enjoy! 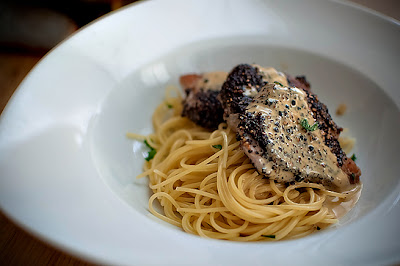 Hope you guys have a great weekend =)