Before we get to today's post - just wanted to let everybody know that I have a guest post over at Jeff's Plate so make sure you check it out!  Jeff is an awesome dude who is currently taking some time off to finish wedding planning of his own! 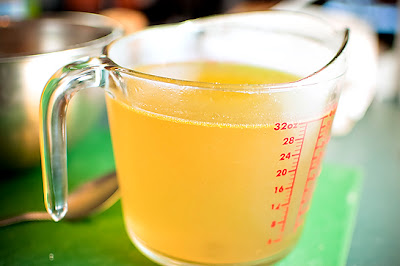 Before I knew better, I always assumed that broths and stocks were the same thing.  While, they are similar in their way of preparation (i.e. simmering flavorings ingredients in liquid for a long period of time), they differ in 2 distinct ways.

#1. Broths are made with meat, as opposed to stocks being made with just bones.
#2. Broths can be served as is, unlike stocks which are usually used to prepare other items.

So now you've learned something new (hopefully - if you already knew the difference, then bravo to you!)

The guidelines to preparing any broth - whether it be beef, chicken, fish, etc. - are quite simple.

#1. Truss or cut the main ingredient (trim any excess fat away - I usually save all of my meat trimmings and throw them in the freezer, and when I have a good pile, I'll make some broth - same with bones, when I get enough bones - I'll make stock) 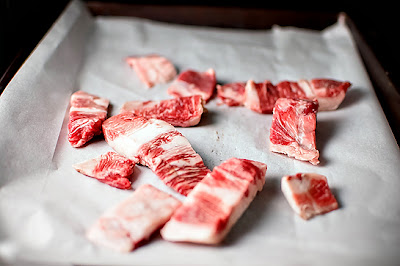 #2. Brown the meat (the caramelizing/browning of the meat is where the flavor is at!); brown or sweat the mirepoix (onion, celery, carrot) 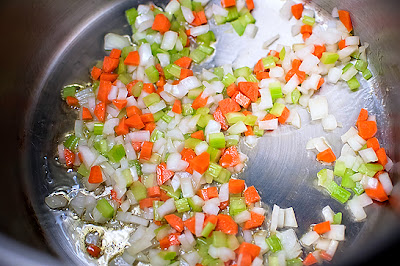 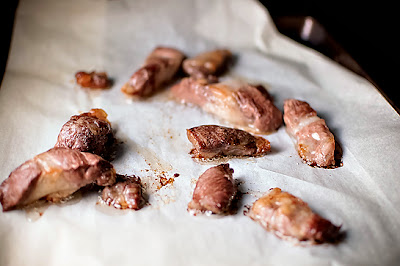 #3. Place the main ingredient & mirepoix in stockpot and fill with enough cold water to cover.  (Normally you'd want enough meat to cover the surface of the water - I didn't quite have enough, so my broth is sort of light, but that's okay - the flavor is still there!) Add sachet of spices (I added peppercorns, thyme, and rosemary), if desired. 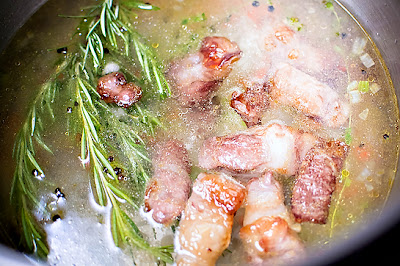 #4. Bring liquid slowly to a boil; reduce to simmer and cook, skimming for impurities, until the flavor is fully developed (about 2 hours).
#5. Strain broth carefully.
#6. Cool and store  (After it's cooled you can easily skim off any rendered fat that has solidified on the top!) or use as is.

Follow those 6 steps and you'll have a broth in no time, no matter what meat you use!
Posted by Peggy G. at 8:13 AM