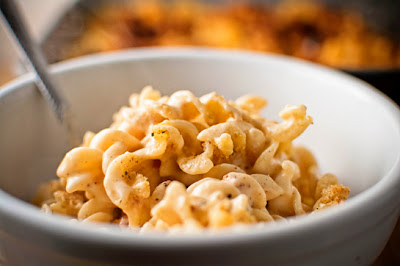 With all of the craziness of my schedule, it's nice to still be able to do Secret Recipe Club.  To not think about school, or work, or anything.  Anything except exploring another blogger's site and making something delicious!

This was just the case with my assignment this month.  I got to explore Crystal from Mrs. Happy Homemaker's blog and was definitely impressed!  I found meals that were just the epitome of comfort foods and lots of things that made me smile.  It was a hard decision, with things like Deviled Egg Spiders to Apple Cinnamon Rolls with Caramel Cream Cheese Icing!  She even has updates on good deals and coupons, as well as DIY craft ideas (quite kid friendly!).  There's lots to explore over there, and I could definitely get lost for hours on her site.

Ultimately, I chose something that has always been comforting to me - Mac n' cheese.  Crystal's quest for the ultimate mac had me quite intrigued and I decided to give it a try (especially since we just learned about bechamel and this had a bechamel base!).  So I used what I had on hand - I replaced the 3 cups of cheddar with a nice block of gouda and gave it a little kick with some cayenne because I dig a spicy mac!

Meanwhile, in a large, nonstick pot over medium high heat, add butter.  Let it warm up and then whisk in flour, paprika, mustard powder, cayenne, and nutmeg.  Cook for 1-2 minutes until it starts to turn a pale white.  You've got the start of a white roux (except it'll be a tad red because of the paprika and the cayenne)!

Slowly add little increments of the milk so the roux doesn't get lumpy, and once you have a smooth mixture, add the rest of the milk.  Bring mixture to a simmer, whisking constantly. Cook until thick enough to coat the back of a wooden spoon. Remove from heat and whisk in cream cheese and the gouda. It will melt without being on the burner.

Mix cooked pasta with sauce and place into a greased baking dish. Top with the shredded cheddar cheese, breadcrumbs and parmesan. Broil until brown and bubbly, about 2-3 minutes. 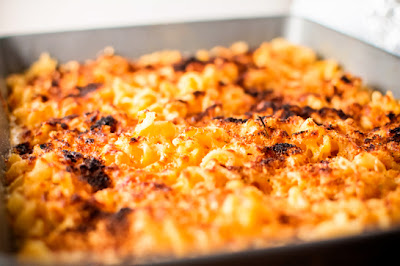 This was some great mac!  It was definitely creamy and full of tons of flavor.  I'll be making this again, that's for sure!  Hope everyone has a great start to their week - I know I did!