So I asked if you guys wanted some knife skills posts and there was a resounding yes!  I'm glad you guys are excited - because I love having an excuse to bust out my knife set!

Anyway, this may seem like a roll-your-eyes kind of post because I'm sure many of you know how to cut up an onion.  But if maybe you're like me (before culinary school), you may just roughly chop and not try to get it too precise.  I've noticed that since I've been in school (5 weeks already and I feel like I've learned such a vast array of tasks!), I find myself wanting perfect and symmetric everything.  It's getting to be a little OCD almost.

So I chose to show how to dice up an onion because I practically use an onion for almost every dish I cook.  It's crazy when you think about it, you know?  So we'll ease into something easy, and then I'm open to taking suggestions for future knife-cut how to's (anything in particular you guys want to learn how to do?  If I don't already know how to do it, we'll learn together!).

You won't need anything fancy.  Just an onion, a (really sharp) chef's knife, and a cutting board. 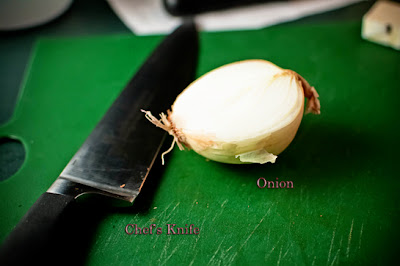 Honestly, you want to have a really sharp knife.  You're more apt to cut yourself with a dull knife than a sharp one.  So invest in a whetstone if you don't already have one (they average about $10 and last a really long time, so there's no reason to not have one).

And another thing, don't "saw" at anything.  You want to strive for one fluid motion through whatever you're cutting.  No back and forth action.

So you'll want to take your whole onion and before you peel it, cut it in half, from the root to the top.  Then peel your onion.  Set the onion flat and make a diagonal cut to trim off the top. 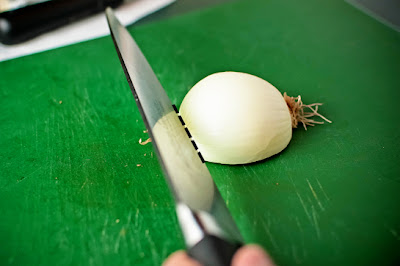 So now you're left with the top (which you can just pitch) and the rest of the onion. 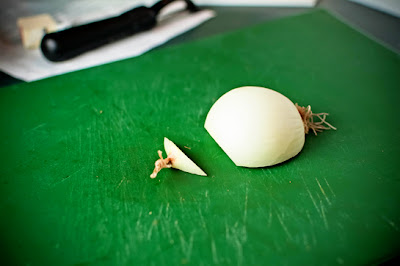 You'll want to put the heel of your palm on the top of the onion (or make a fist and put the tops of your knuckles on the top of the onion) to hold it in place.  Starting with the bottom edge of your knife, you want to make one fluid horizontal slice (about 1/4 inch from the bottom of the onion), pulling the knife closer to you as you cut and ending just before the root - no sawing motions, so this is why it's very important you have a really sharp knife! You want to keep your onion in tact, so make sure not to cut through the root!

Then you'll go up about 1/4 inch from your first cut and make another horizontal cut the same way. 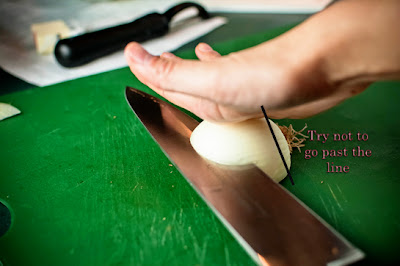 Depending on how big your onion half is, you might be able to get one or two more 1/4 inch-spaced horizontal slices.  I think I did one more with this one.

Next you'll want to turn the onion 90 degrees (so that the root end is at the north end).  Then you'll make a vertical cut (about 1/4 inch from the left or right, it doesn't matter which end you start).  Remember, you don't want to go all the way through, cut before the root so your onion still stays in tact. 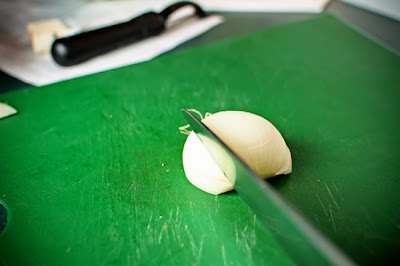 If you want, you can hold the sides of the onion together so it's easier to cut, just watch your fingers and be careful!  Space the vertical cuts about 1/4 inch apart (we're going for consistency here, right?)  I think I got about 5 or 6 vertical cuts. 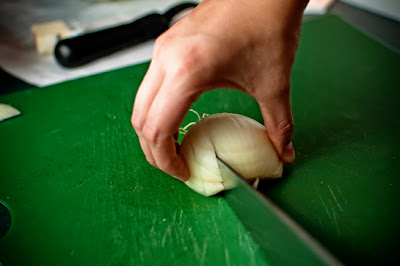 After you make your vertical cuts, you'll want to turn the onion back 90 degrees (whether you're left or right handed, it doesn't matter, my root end was to the right because I'm left handed).

The key to an even chop is to have a stable, sharp knife.  Make one fluid cut.  No sawing.  I know I've said that a million times, but seriously.  Having my chef say it over and over made a difference with me and a lot of the other of the students.  I used to be a "sawer".  I'll admit it.  But I can't go cutting anything like that any more, regardless of what it is!

Anyway, make sure the tip of your knife is on the cutting board (in front of the onion, and just bring your knife down to make a vertical cut - 1/4 inch spacing!).

Continue to make 1/4 inch-spaced vertical cuts until you get to the root. 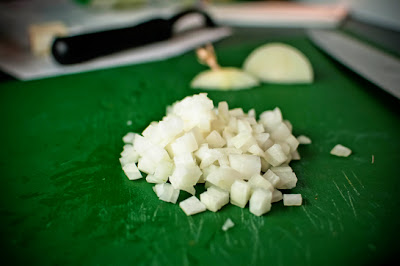 I'll hopefully pop in during the weekend (can't make promises!), but if not, we've got Espagnole sauce next sometime next week!  And if you have any knife cuts you want to learn - let me know and I'll try to feature them next!

Email ThisBlogThis!Share to TwitterShare to FacebookShare to Pinterest
Labels: cut an onion, how to, knife skills, onions