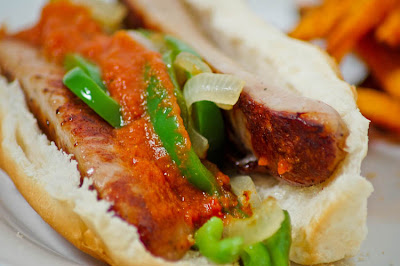 O-M-G.  I know it's been a while since I posted a recipe, but gosh, I've been busy!  Brother's wedding, school, and work!  Whoa, buddy.  But don't fret, I've been cooking.  Oh man, have I been cooking!  And although I didn't make it to this week's round of Project Food Blog, I'm still going strong!  In the 3 challenged I was in, I learned an indefinite amount about blogging, food, and made a few new friends along the way!  That's a win in my book!

So during this little break of mine, I've decided to change up a few things on the blog, as well.  I'll still be posting recipes on Mondays, Wednesdays, and Fridays... but in addition, I'm going to blog on Tuesdays and Thursdays, as well!  It may not necessarily be a recipe, but maybe just a short post... maybe on an interesting article I've ready, some new kitchen gadget I've discovered, my book club (which I've just recently joined and majorly excited about!), and hey, maybe even some actual wedding plans or ideas!  I just figure, the more I blog, the more I learn.  And learning is half the battle, right?  So let's got on with a recipe, why don't we!

German Currywurst is a pretty popular German "fast food" type meal.  It's usually served out of food trucks (spanish and asian cuisines aren't the only ones with food trucks, ya know!)  It's usually a hot pork sausage that contains generous amounts of curry powder and served with curry sauce on top.  I don't know what gave me the idea to do this, but I figured hey, it couldn't hurt to make my own version of this sucker!

And as a bonus, I've added a sweet potato fry recipe that would go perfectly with this!  We've got boatloads of the little guys, so I've been making fries, mash, and whatever else I can cleverly come up with! 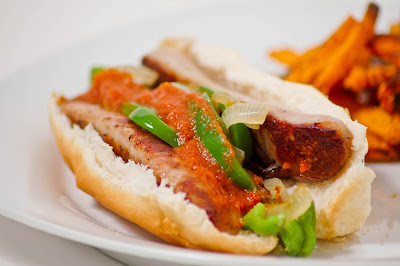 Currywurst Ingredients
1 (15 ounce) can tomato sauce
4 bratwursts, split in half
3/4 tablespoons chili sauce
1/2 teaspoon onion powder
1 teaspoon white sugar
Salt and pepper, to taste
1 pinch paprika
Curry powder to taste (I used 1 teaspoon)
1 teaspoon Garam Masala
1 green pepper, sliced and seeded
½ onion, sliced thinly
Hot dog buns (optional)
Heat medium saucepan under medium high heat.  Pour tomato sauce into saucepan, then stir in the chili sauce, onion salt, sugar and pepper. Let simmer over medium heat, occasionally stirring. Bring to a gentle boil and reduce heat to low. Simmer another 5 minutes.
Meanwhile, under high heat, sauté onions and peppers for about 5 minutes, or until starting to soften.  Remove and set aside.
In same skillet, cook bratwurst halves for about 3-5 minutes per side, or until browned.
Slowly stir in paprika, garam masala, and curry powder into tomato mixture.  Season with salt and pepper, if needed.  Let simmer for a few minutes and top bratwursts, along with grilled veggies.
You can choose to put your brats in hot dog buns, like I did, or just forget the bread and mix them with the grilled veggies and sauce.  Either way is pretty tasty!  I definitely love the Indian flavors in this traditionally German dish!  Definitely a keeper in my book! 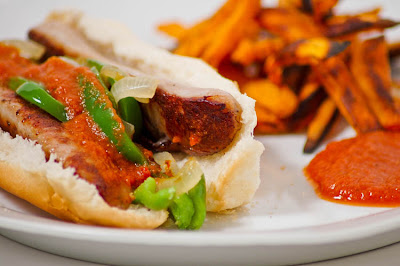 Sweet Potato Fries Ingredients
2 medium sweet potatoes, peeled and cut into wedges or fries
1 teaspoon paprika
1 teaspoon cayenne pepper
Salt and pepper to taste
1 tablespoon olive oil
Heat oven to 425 F.
Mix all ingredients in bowl and toss well.
Place sweet potatoes in an even layer on baking sheet and bake for about 25 minutes, or until fries are golden brown.
Serve with bratwursts or whatever else you're cooking up!  The currywurst sauce also makes a great substitute for ketchup!
And it's Wednesday, so you guys know it's CSA day!  Here's what awesomeness we got this week:
1 Bunch of Radishes
1 Pie Pumpkin
1 Bunch of Tender Greens
1 Bunch of Bok Choy
2 lbs. sweet potatoes
2 lbs. Fuji apples
1 French Baguette 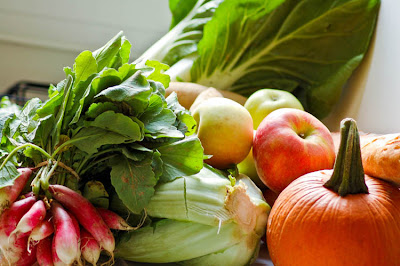