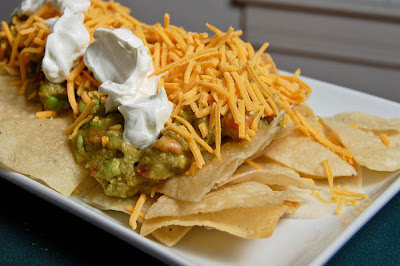 Vegetarian? I'm not usually one to eat things without meat. Not that I don't dislike plain vegetables, it's just I can never find anything filling and appealing enough to eat without meat. I know vegetarians everywhere are cringing at that statement, but maybe you guys could give me some insight eh?

These were actually supposed to be faux tacos, too, but once again, I had to improvise. Jicama was supposed to be sliced really really thin so it would act as a taco shell for my filling, but I ran into 2 problems. #1... I didn't have a mandolin (which I'm really thinking about investing in sometime soon) and #2... my knife skills aren't amazing and I couldn't slice really really thin. So nachos were born.

Because I couldn't use my jicama as taco shells, I used them as faux nacho chips instead. Along with a mixture of corn tortilla chips (which I'll give the details on making here in a minute) to give it some added texture. And let me just say... I love jicama. Not many people know about jicama (key example, the grocery store clerk who completely had the "what the hell is this?" look on his face. It's kind of ugly on the outside, but on the inside is a sweet apple-y flavored vegetable after you peel the exterior. Anyway, I digress...

In a medium bowl, lightly mash up the avocados, papaya, and tomato. Mix in the lime juice, coriander, cinnamon, olive oil, salt, and pepper. Mix in as much of the 1/2 cup of cilantro as you'd like, but save some for topping if you wish.

To make your tortilla chips, add enough vegetable oil to a large heavy pan to bring it up about 1/2 and inch. Heat the oil under medium high heat and fry about 10 chips at a time, or more if you wanted to and had a big enough pan. Cook each for about 30-45 seconds per side. Place in a bowl lined with paper towels and salt each batch as they come out of the oil. It will allow the salt to "stick" on the chip, if you will.

To plate, get a large plate and mix in the jicama with the chips. Pile on the avocado mixture, top with shredded cheese, and then sour cream, if desired. Maybe strict vegans can't do those last 2 toppings, but pile it on however you wish!

I really loved the flavor profile of this dish. The avocado mixture with the chips tasted differently than with the jicama chips. It was kind of crazy how well the jicama paired with the mixture. When the chips were in the dip, you could really taste the lime, but when the jicama was thrown in there, the lime sort of "blended" in and you could really get a sense of all the flavors in the dish. This really impressed me and would be a great appetizer dip for any occasion! Enjoy!
Posted by Peggy G. at 8:28 AM