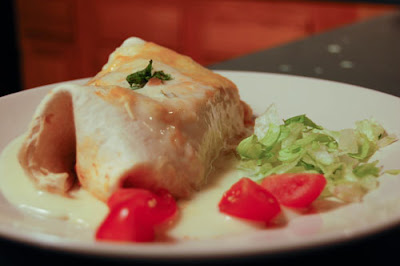 The dawn of football season is upon us. So bring on the comfort food! Tons of cheese, grease, wings and full bellies. That's what football food is all about... right? So to start the first Sunday of football season off right, we had our friends Kendra and Nick over to watch a couple games and eat some grub. And we had some pretty great burritos for dinner that went very well with a few beers!

Heat oil in large skillet over medium to high heat. Season chicken with salt and pepper and add to skillet. I had a little extra chicken so I had to do this in two batches so I wouldn't overcrowd my pan. Toss chicken until cooked through, maybe 5-7 minutes each batch. Transfer chicken to bowl and set aside.

Add onion, bell pepper, and garlic to skillet. Season with salt and pepper and cook until almost soft, about 4-5 minutes. 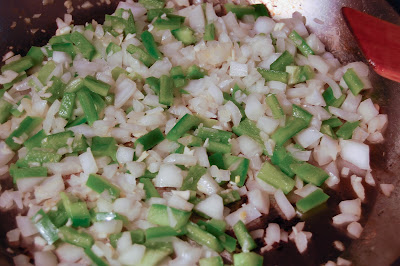 Add chili powders and oregano. Stir until incorporated. Then add tomato paste and stir until well combined. Then add chicken broth and crushed tomatoes. Bring mixture to a boil, then lower heat to a simmer and let sauce thicken, about 15 minutes. Stir the mixture occasionally.

Meanwhile, shred the chicken coarsely. You can have a few big chunks in there for added texture, it doesn't have to be perfectly shredded. Add the chicken to the sauce and simmer for about 3 minutes. Season with salt and pepper, if needed. 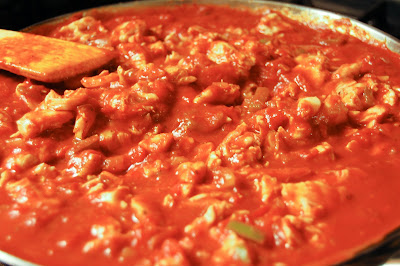 Preheat your oven to 450 degrees. One at a time, place tortilla on work surface. Add desired amount of cheese to center of tortilla, leaving about 2 inches on top and bottom. Add a few chopped cherry tomatoes and scoop of chicken filling mixture. Then top with lettuce. Fold over top and bottom and roll into burrito. This takes a bit of practice. I found that I was filling the burritos with too much and could hardly close them, but if it's not pretty, it's not the end of the world. It's the taste that matters in the end, right? Fold each burrito over and place in roasting pan, seam side down. Do this for the remaining 5 burritos. I found that only 6 would fit in my pan, but if you can get more, be my guest, because there's going to be TONS of filling left over. 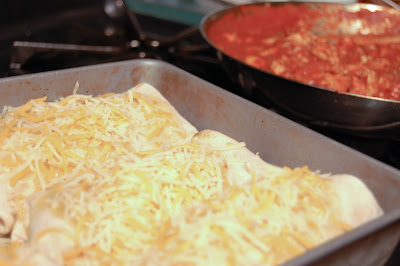 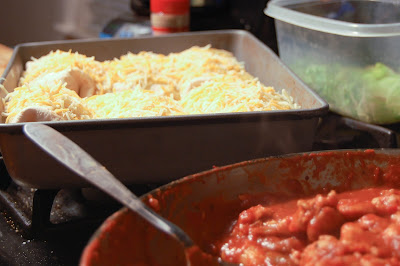 Top each burrito with enchilada sauce and some more shredded cheese. Then bake in the oven for about 15 minutes, or until the cheese is melted.

To plate, I placed a scoop of queso blanco on the plate, then put the burrito over that, and topped with more queso blanco and a pinch of fresh cilantro. This was quite cheesy, but I like it that way, and nobody else seemed to mind either! 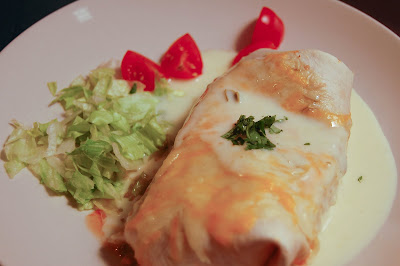 This was a very filling dish and perfect for a football season dinner. Was very reminiscent of something you get at an authentic Mexican restaurant. Enjoy!
Posted by Peggy G. at 8:38 AM