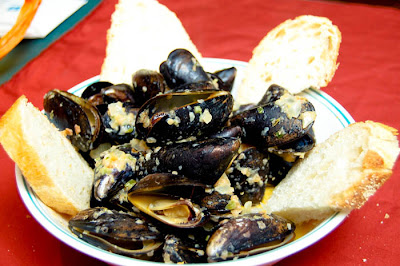 Many lessons learned this weekend:
1. lonely military wives hate it when you don't take your hat off during the star spangled banner.
2. i don't like it when lonely military wives tell andy to take his hat off during the star spangled banner, and not tell any of the millions of other people to do so.
3. the earth is not one's trash can
4. a funnel cake always makes everything better.
5. chicken on a stick is an abomination... not only disgusting, but disrespectful to chicken.

Needless to say, drinking was involved, and may have escalated certain events. Nobody went to jail, nobody lost an arm... no harm done. Fireworks were sub-par, the night was chilly, but we were in good company and really... that's all you can ever ask for.

In a food processor, combine the cumin, tomato, cilantro, ginger, and chiles. Turns out, I had a really big tomato and so it mostly tinted the curry paste red, but the recipe was originally green curry based, so hence the subjective coloring. Set mixture aside.

Heat dutch oven under medium high heat and add oil. When oil is shimmering and hot, add onions and cook until soft and translucent, about 5 minutes or so. Add the curry paste and cook for about 5 minutes longer. Add in coconut milk and stir. If too thick, add water to thin mixture out. Season with salt and pepper to taste.

Bring mixture to a boil and add mussels. Mix well, making sure mussels are well coated with curry sauce. Cover mixture, lower heat to a simmer, and steam mussels for about 5 minutes, or until all of the shells have opened. Discard any shells that have not opened.

Serve in a large bowl with pieces of a nice baguette.

The curry broth in this dish is what totally did it for the both of us. It was so flavorful and so different from the usually white wine and garlic liquid that most mussel dishes are steamed in. The bread was great for dipping and soaking up the liquid, and this just have easily could have been served with a big pile of rice. Enjoy!
Posted by Peggy G. at 4:51 PM