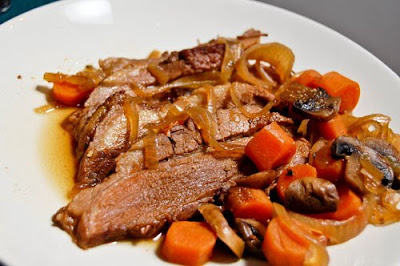 Andy just jumped on this recipe. It gave me an excuse to buy him some beer, since I needed to get some porter from the liquor store. BBC (Bluegrass Brewing Company) is a local brewery here in Louisville. They have pretty good beer. The food is a different story (personally I find it kind of bland), but the beer is where it's at. Anyway, this recipe was the first meal that I have actually "slaved" over. It's not a short recipe by far. It's definitely a two day project. So if you've got the time, or are just going through some sleepless nights... then maybe you should try making this amazing brisket. And I know it was well worth it because I gave my mother the leftovers and she called it "awesome." And for my very Filipino mother to call something "awesome"... that is something special.

The original recipe requires an ovenproof pot and to have the brisket cook in the oven, but you guys know how much I love my slow cooker, so I opted for that. It made the recipe a tad bit longer, but I think the results are just as good, if not better.

First, turn your slow cooker on high. This way, when you're done with the next couple of steps, it'll be hot and ready.

Mix the salt, pepper, dry mustard, sage, and thyme in a small bowl. Rub the mixture all over the brisket and set aside. 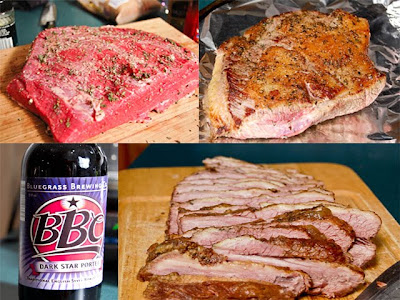 Chop up the bacon slices and heat them under medium heat until fat is rendered. Remove bacon from pan with a slotted spoon and leave as much of the fat in the pan as possible. I let my bacon bits cool and then fed them to the dogs as a special treat, of course, stealing a couple for myself as well. Add brisket to the pan with the bacon fat and brown brisket on both sides, about 5 minutes per side. After both sides are decently browned, transfer brisket to a sheet pan.

In the same pan used to brown brisket, add 2 cups of the chicken stock, scraping up as many of the brown bits as possible. They're PACKED full of flavor. Bring the stock to a boil. Add in beer, prunes, bay leaves, and brown sugar. Return mixture to a boil. Turn off heat and add mixture to your slow cooker. Place brisket in slow cooker as well, fat side down. Place the sliced onions over top of the brisket and scatter out the garlic cloves. 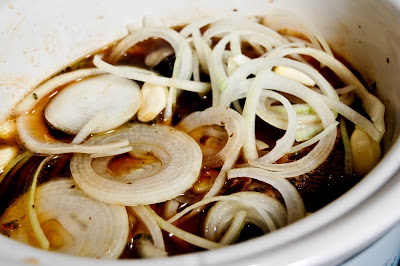 Cover the pot and braise in the liquid for about 1 hour. Uncover the brisket and turn over, allowing onion slices to fall below brisket. Recover and braise for another 30 minutes.

Add 1 more cup of chicken stock and braise for another 1 hour and 30 minutes.

Take the brisket out of the liquid and place on sheet pan. Add final cup of chicken stock, mushrooms, and carrots to liquid mixture. Place brisket over the vegetables and cover. Braise the mixture until the carrots are tender (you can add more stock if needed, but I didn't have to), about 45 minutes longer. Turn slow cooker off and let cool. I took my bowl out of the shell so it would cool faster (considering it was about 3 am at this point, I was ready to hit my bed and be out like a light). Then place in the refrigerator, uncovered, overnight. Like I said, it was probably in there from 3 am to about 3 pm the next day.

It was pretty awesome waking up the following morning because as I opened the fridge to get some juice, you could just smell the sweet smell of brisket just hit you in the face. I pretty much opened my fridge every chance I could, just to smell that smell. Andy said I should market a "brisket air freshener"... I'm sure it's already out there somewhere... after all, they do have "bacon air fresheners". But I digress...

When you're ready to start preparing for dinner, preheat your oven to 350 degrees. Take the brisket pot out of the fridge and spoon off any fat from the surface and discard. Take brisket out of pot and place on cutting board. Thinly slice the brisket against the grain and place in a large roasting pan. 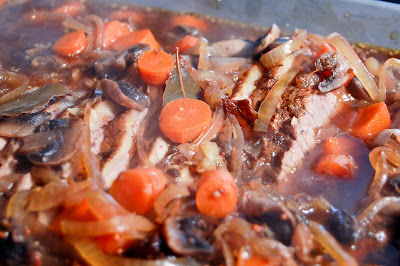 Cover roasting pan tightly with foil and cook in oven for about 1 hour and 15 minutes, when brisket and vegetables are heated through.

Serve with vegetables and juices.

I'm telling you, this was amazing. I got that feeling you get when you study really really hard for a test and something and end up getting an A+ in return. I worked really hard, stayed up really late, but the result was well worth the long prep time. The meat was tender, the vegetables were juicy, and my only regret is that I didn't have any fresh bread lying around to dip in the delicious juices! Enjoy!
Posted by Peggy G. at 11:01 AM